Learning From Each Other: Co-op Conferences 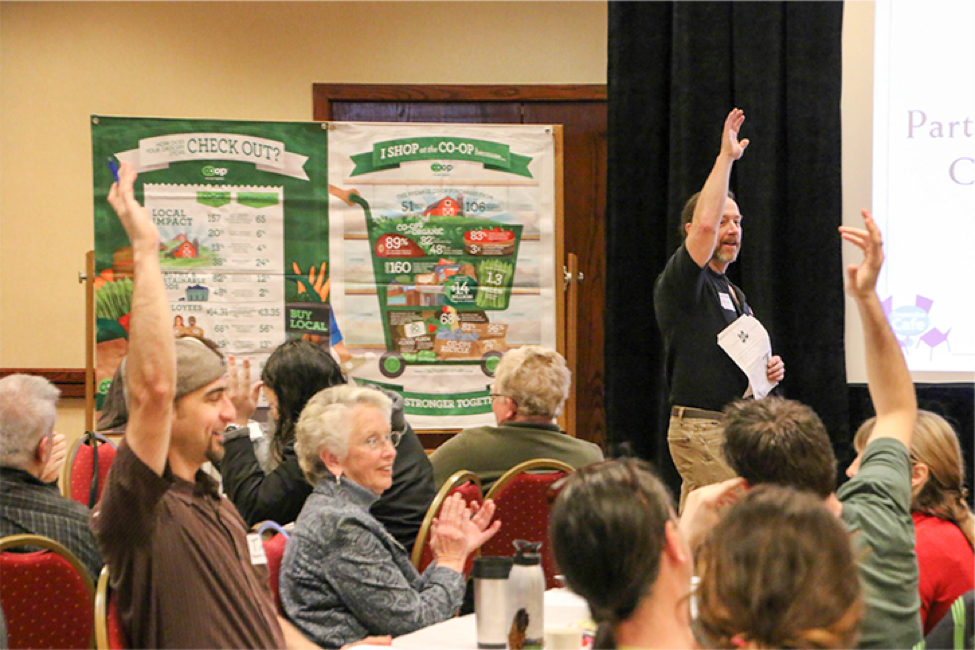 One of the seven international values that Chicago Market subscribes to is known as Principle 6 or “P6”: Co-operation Among Co-operatives. P6 holds that co-ops are strongest and most effective when they work together, through local, regional, national and international structures. Grant Kessler, Chicago Market Owner #3 and our Board President, attended two gatherings of regional food co-ops recently, and had a chance to share and bring back valuable learnings for our team. Here’s his report.

Starting a food co-op is hard work…for lots of reasons, but among them is knowledge and resources. If, say, you were a large grocery store chain and you wanted to plunk a new store down somewhere, you’d have the capital, the previous knowledge, and the employees at hand to easily pull it off.

In place of most of those things, startup co-ops have values-driven volunteers and Owners. Super cool, but there is a lot of knowledge and resources lacking in that model. Enter the helpful folks in the co-op world like CDS Consulting and Food Co-op Initiative (FCI).

CDS Consulting is a cooperative of consultants who “specialize in co-op governance, leadership development, expansions, retail improvement, marketing, member services and human resources.” In addition to their direct consulting services, they periodically offer one-day workshops in board leadership development, and Karen Jacobs and I recently attended one they held in Chicago called CBL101 (Cooperative Board Leadership 101).

What did I learn? For starters, I learned that an effective Board needs to devote time to building skills and wisdom. Karen and I took extensive notes and shared with the team, and we have each committed to giving a short presentation about one topic we covered, at a future Board meeting.

Presenters Ben Sandel and Todd Wallace gave us a fascinating overview of co-op social and economic history beginning with the Rochdale co-op in 1840’s England. Check out this video for a fun little history of the “Rochdale Pioneers.” And did you know that in the 1930’s the Consumer Cooperative Trading Company in Gary, Indiana ran several African-American owned businesses, including a filling station, a credit union and an ice cream and candy store that taught children about small business and economics?

We covered roles and responsibilities of Board members, including the fiduciary role Board members hold – we are responsible for protecting the best interests of co-op Owners as a group. There was a terrific presentation about “policy governance,” which is a model that sets up how the Board can interact effectively with a General Manager. Chicago Market’s Board has agreed to adopt this model but have not begun the work yet of writing the policies that we’ll need, so this education and discussion with fellow co-ops was very valuable.

The last topic of the day was finances – teaching those “non-accountant type” Board members in the room how to look at financial statements and understand the basics. We even graphed sample balance sheets out with LEGO blocks – sounds silly but hey, some of us are visual learners! 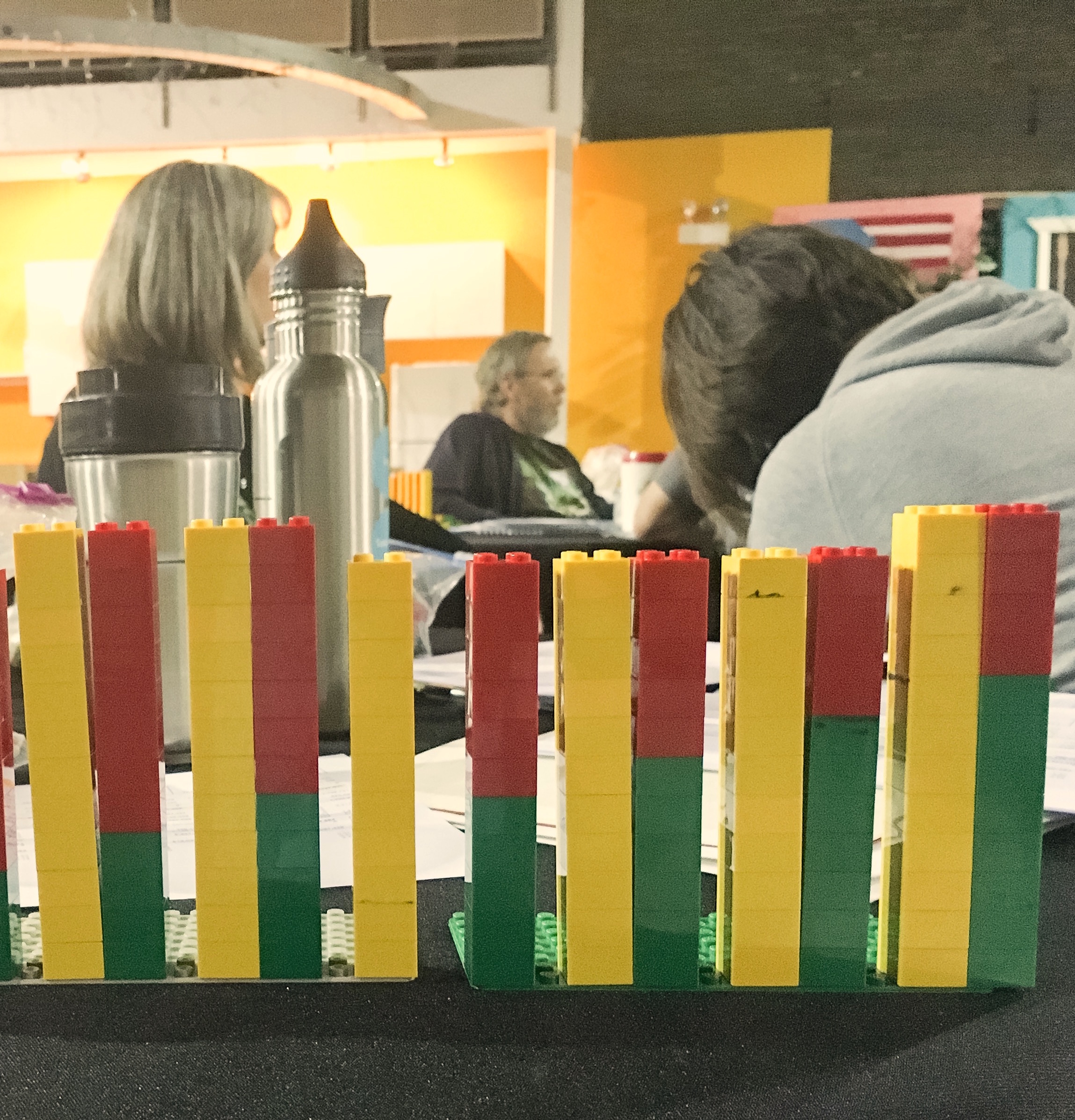 Our favorite quote of the day came from Ally Young of The Dill Pickle co-op, when we were talking about how to talk about the benefits of co-ops for our communities: “I like to talk about co-ops being a part of a regenerative rather than an extractive economy.”

A week later I was in Champaign-Urbana for FCI’s 4th Annual Illinois Startup Day. FCI is also a co-op that provides information, training, technical assistance and seed capital to startups. Jacqueline Hannah, a long-time friend of Chicago Market and former GM at Common Ground Co-op in Urbana now works with FCI and she programmed a terrific day of teaching, expert outside speakers, and workshops in which folks from other Illinois startups shared recent successes and what they’ve learned.

We began with the topic of co-op Owner growth. Presenters talked about strategies they’ve used to communicate with and recruit new Owners, ranging from Facebook campaigns and ad promotions to in-person events like film screenings, tabling, and even throwing a yearly “birthday party” on the day the co-op was founded. What did I learn that YOU can do right now? Help us improve the reach of our Facebook posts – click the “like” button, click the “share” button, follow and retweet us on Twitter – more “likes” means these feeds will show our posts to more people. You’re on the team – help your co-op make it happen!

Jacqueline then talked about Policy Governance and a couple other co-op Board leaders talk about how they’ve implemented it. Kathy Nash of Prairie Food Co-op in Lombard made it clear that parts of policy can and should be in place way before a General Manager is hired – I’ve taken this to heart and we’ll work on that with Chicago Market’s Board soon.

Another big topic was Owner communication – how does an effective Board communicate with Owners? Are we sharing enough? Are we presenting things in ways that are useful to Owners? Do Owners know they should share their thoughts with us, too? Chicago Market’s Weekly Updates are a step in that direction, but we have new ideas too, thanks to my day in Urbana. Got something to tell us? Come to a Board meeting. Send info@chicagomarket.coop an email. We love to hear from you!

I’ll close with two things. By participating in these workshops we learned that in addition to professional help that CDS and FCI offer, there is incredibly rich information available from our friends in other co-ops. And we can be a resource to others. Co-ops ARE community and the cooperative principles rock!

And this: co-ops are powerful. Take a look at these quick facts Jacqueline shared. In the last 10 years:

You are part of this incredible movement; you are among these other Owners around the country who want a values-driven grocery store; you are making it happen.