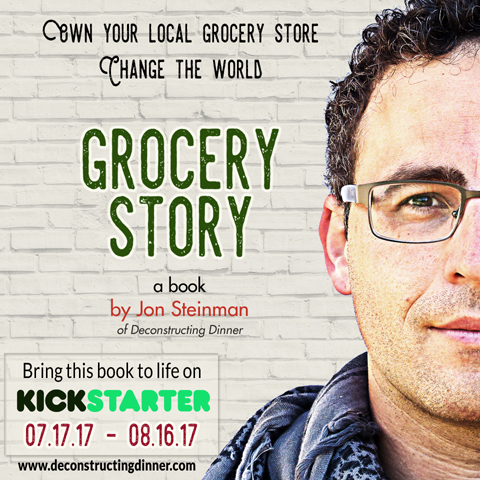 Author Jon Steinman is a journalist and producer of a multimedia (podcast, television series and annual food documentary film festival) initiative, Deconstructing Dinner. He's also been a leader of Kootenay Co-op in Nelson, British Columbia. Now he's bringing the idea of "Community Supported Authorship" to a new project. His book, Grocery Story: The Promise of Food Co-ops in the Age of Grocery Giants, will explore the role food co-ops like ours can play in today's food system - why change is needed, why co-ops are the right model to make it happen, and how they already empowering local communities.

Funding for development and writing of the book will be through a Kickstarter campaign, running through August 16. Click here now, to visit the campaign page to learn more about Jon, his work, and his plan to make Grocery Story an important resource for food co-ops. A short video there makes a great case for food co-ops!

You can help to crowd-fund the project, and pre-order an E-book or paperback or get other rewards, with your pledge. If the campaign reaches its funding goal the book will be published by New Society Publishers (estimated date: February 2019).