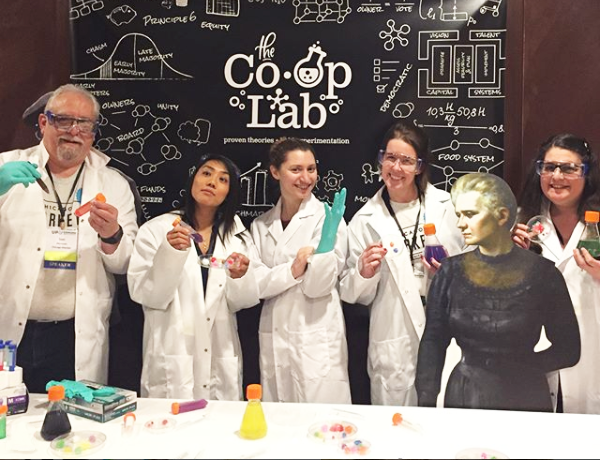 Hey Chicago Market Owners! Sunny here, one of your new Board members elected this past July. This weekend I had the opportunity to attend the Up and Coming Food Co-op Conference with over 300 co-op enthusiasts. I'm pretty new to the start-up and co-op world, and I couldn't be more grateful to the Chicago Market Board for sending me up to Milwaukee for a couple days of awesome learning. My biggest takeaways:

1. We are a part of an incredible community. Co-ops from across the country were there--even multiple from Alaska! The "P6" you might see on social media refers to the 6th principle of co-ops: cooperation among cooperatives. It was really inspiring to hear other co-ops tell their stories and share their best practices, hard lessons learned, and every little thing in between. Their willingness to share with us is critical to every stage of our development, and they share graciously. We not only have support here in the city and the northside, but from all over the country!

2. Co-ops mean more to their communities than I had ever realized. A lot of our ownership supports Chicago Market because they want a place to buy locally grown, sustainable, and quality food - it's a pillar of what we seek to accomplish when our doors open. In the meantime, however, we are fortunate that we have a lot of grocery options nearby where we can buy other produce to feed our families. This weekend I met a number of co-op owners from urban and rural areas that are starting co-ops because grocery chains have abandoned their communities, leaving them food deserts. They're opening food co-ops not only to support their local economy, but fundamentally to be able to feed themselves. These stories were incredibly compelling and made me feel so proud to be a part of the co-op community. They were asking us questions about the progress Chicago Market has made, and I was so eager to be a small part in helping them move forward as well!

3. The food co-op community is committed to making itself a space for everyone. Chicago Market is already working hard to ensure we exemplify this. The main reason I joined the Chicago Market Board of Directors was to make sure that we truly serve the people in our community, regardless of socioeconomic status or ethnic identity. One of the main tracks on which conference organizers focused programming was Co-ops and People of Color. YES! I humbly listened to stories from other co-ops in which people of color did not feel welcome or encouraged to participate, or their boards were hesitant to recognize these problems could even exist. It gave me a sense of relief to know that our Board is already well aware of these issues, and pride that we (definitely not just me!) are actively looking to understand and address these issues for our community.

4. Chicago Market is in a great position. Let's keep up the momentum! I'm gonna be brutally honest here: before I joined the Board I had no idea how viable this great idea was or what had been happening in the past few years to get us to an opening day. Some of our other Owners may be wondering the same. This weekend was so heartening as I realized that this process just takes way longer than I thought...which makes sense when I stopped to think about opening a significant business with values and principles rather than corporate backing. There is a tried and true process to starting a food co-ops, and the Board over the years has done a great job plotting out our development and getting to each stage. Co-ops from other cities were so excited for us to have reached the 1,000 Owner mark and continue moving forward with a sound plan that many of them helped us develop. They were us before; are now open; and are excited for us to join them!

For Owners who have been wondering what work has been done to get us to Opening Day, I encourage you to reach out! This co-op is literally the product of its Owners' efforts, and nothing more. When I joined the Board, I was exposed to the insane bevy of work our volunteers and directors have been up to for years. Volunteer with us and see!

The Up and Coming Food Co-op Conference is focused on helping communities start and launch their own food co-ops. This event also offers resources and workshops for co-ops in the first years of operation, with the aim of helping them achieve success.

Held each year since 2010, Up and Coming is coordinated by the Indiana Cooperative Development Center and its partner Food Co-op Initiative.  The 2018 local food co-op host was Outpost Natural Foods.